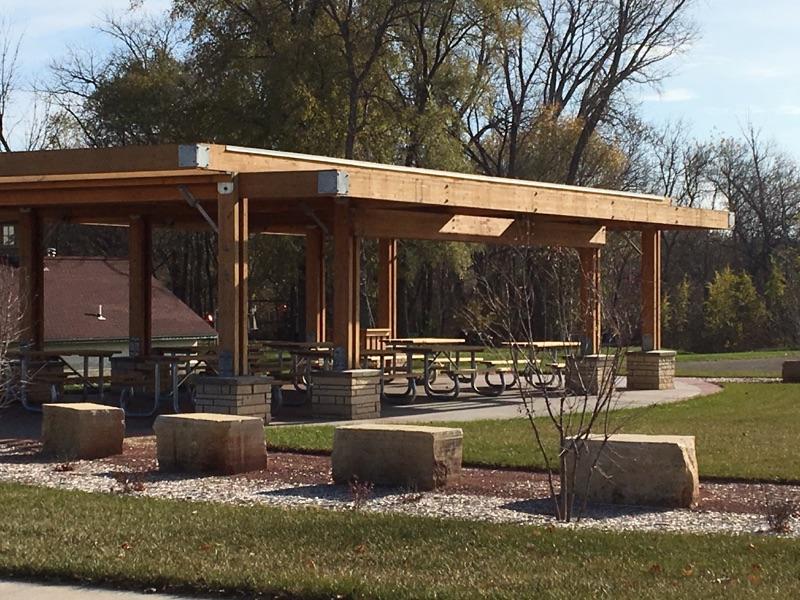 The shelter, with picnic tables, accommodates 48 people. There are no restrooms in the park, however the Cedar Falls Recreation Center is located 1 Block adjacent.

To Rent the Shelter:

About the Park
Acquired in 1996, this park is dedicated to those who have served their country. The park pays tribute to all 5 military services and recognizes individuals by engraving their names on the five brick walkways established in this passive park. It is an area created for quiet reflection and/or public ceremony.

History of Veterans Park Phase I
Tucked behind the Cedar Falls Recreation Center at the corner of Waterloo Road and 14th Street is a little park with a special purpose—to honor the service of veterans. Veterans Memorial Park Phase I was dedicated in 1997 as a fitting memorial honoring our country, paying tribute to the five military services, and recognizing the individual service and sacrifices of veterans. At the main entrance to the park is a miniature Statue of Liberty gifted to the city by the Boy Scouts of America in 1952. The focus of the park is a 50 foot flag pole placed in a circular plaza paved with stained concrete and engraved bricks. The pedestal for the flag pole is comprised of five jet black granite tablets mounted in a pentagon shape foundation of exposed aggregate. A tablet for each service branch is etched with its seal. Walkways of bricks bearing veteran’s name, branch of service and service dates radiate from the base of the granite pedestal. (These bricks may be purchased by veterans, relatives, or friends wishing to honor veterans. Please use the attached form to place an order.) The design of the park is both a community and individual expression of thanks and honor to all veterans. Throughout the park are evergreens, flowering trees and other plantings which, along with five granite benches surrounding the plaza, provide an environment for visitors to rest, reflect, or meditate while at the memorial. Veterans Memorial Park is a special place to preserve the memories of veterans who answered our nation’s call and ever reminds us that freedom is not free. 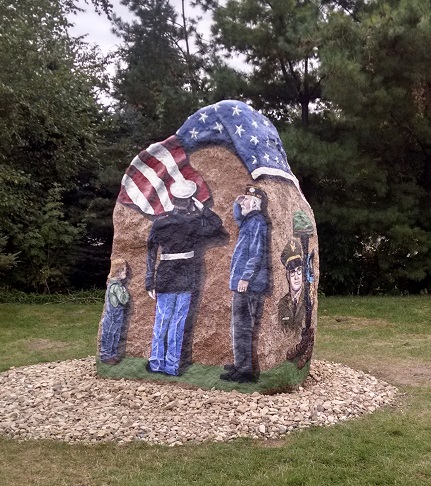 Black hawk county Freedom Rock
The Black Hawk County Freedom Rock is part of an Iowa Freedom Rock Tour. The idea originated with Ray “Bubba” Sorensen II, a native of Greenfield, Iowa, the site of his original Freedom Rock. He launched the tour in 2013 engaging local support to locate a rock for painting in each of Iowa’s 99 counties. Donated by a local developer, the rock was transported across town to its location west of Veterans Park Phase I. The eight foot high granite boulder, estimated to be 14 tons, was installed in the park on September 11, 2015. The front side features an American flag draped from the top below which stands a small boy with his hand over his heart, a marine in dress blues saluting, and an aged Legion member saluting; an intergenerational demonstration of patriotism. The south side is a likeness of U.S. Petty Officer Second Class Taylor Morris, an explosive ordinance disposal expert (EOD) and Cedar Falls native, who lost parts of all four limbs in an explosion May 2012 in eastern Afghanistan, and who survived quad-amputations.

The artist notes, “…who in my mind symbolizes service, sacrifice, and perseverance.” To Taylor’s right are the words: “WHEN THE BATTLES ARE DONE THE WAR ISN’T OVER FOR OUR VETERANS OR THEIR FAMILY—IT IS JUST BEGINNING.” Below these words, kneeling at the grave of a soldier is a widow or mother, symbolizing those who did not come home. On the back/west side are images of the U.S.S. Juneau and the 5 Sullivan brothers from Waterloo. Together they joined the Navy in WWII and served together on the U.S.S. Juneau. They all perished when a Japanese torpedo struck their ship on November 13, 1942. On the narrow side is a likeness of Cedar Falls Medal of Honor recipient U.S. Army 2nd Lt. Robert J. Hibbs. In March 1966 he was killed retrieving one of his wounded soldiers while under fire from the Viet Cong. He was the first Iowan to receive the Medal of Honor in that war. Bubba’s goal for Freedom Rocks is “to dig up personal stories and illustrate them so they are not forgotten, they also inevitably start conversation of other veterans’ stories.”

VETERANS MEMORIAL PARK PHASE II
The need for additional space and a facility for veterans’ families and the community to gather resulted in the development of Phase II. Fundraising, donated time, materials and equipment, countless volunteer hours, and the support of the community resulted in the park and shelter being dedicated in June 2016. It is located directly south of Phase I.

The Veterans Memorial Park Phase I was possible due to the commitment of the following groups:
-The State of Iowa
-City of Cedar Falls
-American Legion Post 237
-Amvets Post 49
-Veterans of Foreign Wars Post 1623
Phase II has been recognized with a Cedar Falls Business & Industry Award and was made possible by efforts of Sid Morris and Mike Butler.