The Overmans came here from Ohio, and purchased land from pioneer William Sturgis, and built a mill on the Cedar River.11 The first burial in what is now Greenwood Cemetery was a daughter of Dempsey Overman who died in 1849, and was buried in the Overman family cemetery.12 The property was eventually turned over to the city of Cedar Falls. The land given to the city by the Overman family makes up the area called the “Original Section” on the present map of Greenwood Cemetery.

The Mularky family also owned private land along the bluffs near the Overman Cemetery, and developed it as their family burial ground. The earliest burial of the Mularky clan was William Mularky in 1852. As well as using the area for their own family’s burials, the Mularky’s sold lots to other people, naming their section Riverside Cemetery. After the most desirable lots were sold, it was taken over by the city and incorporated as the First Addition to Greenwood Cemetery.13

The Overman and Mularky plots in Greenwood Cemetery run along the northeast bluff overlooking the Cedar River. The cemetery continued to expand in the years following its first two acquisitions. The trend of development was to the west and south, away from the bluffs, but keeping to the remaining naturally timbered slopes of the Overman Cemetery. West of the Overman land lay yet another family cemetery. This cemetery was called Wild’s cemetery after the family buried there. The earliest burial of the Wild family was of Daniel Wild on February 4, 1903. The Wilds are buried in the southwest corner of what is today Block 1 of the Second Addition. After some years of private ownership the Wild land was purchased by the city and added as the Second Addition to Greenwood Cemetery. What later became the Woodlawn and Sunnydale Additions to Greenwood Cemetery were parts of this purchase as well.

The northwest portion of the cemetery was named St. Bernard’s. It was named St. Bernard's after the Catholic Church bought the land, probably from the Mularky’s, in 1901. Catholics are buried in consecrated land and originally developed separate cemeteries. (Today all of Greenwood has been blessed.) In 1938, all cemeteries under the control of the Catholic Church became separate corporations. It is during the incorporation that the name was changed to St. Patrick’s. In June 1987 the land was deeded to the city. Since the city took over St. Patrick’s, the area is no longer limited to Catholic burials. This section also includes a unique Priest’s Section, a small circular area is located in the middle of St. Patrick’s. The section remains reserved for the burial of priests. There are currently five priests buried in this section. In October 1901, Reverend Bernard Goyle, a former priest at St. Patrick’s Church in Cedar Falls, was the first burial here.

More recent additions to Greenwood Cemetery include the Oaklawn and Sunny Slope Additions. After spending time at Greenwood Cemetery one notices the elevated ground of the Oaklawn Addition. This is due to having used the area as a place to put the backfill of graves from the older parts of the cemetery before the area was developed for burials. The Sunny Slope Addition has not yet been plotted for burials.

The Soldiers Monument was erected in 1914. The biggest expenditure for monuments came with the erection of the Mausoleum. In 1913 Mart J. Vantliburg and others promoted and built a mausoleum near the main entrance to the cemetery. The city took over the responsibility with an endowment fund of $5.00 per crypt. The titles of the unsold crypts remained in the hands of one of the promoters, who sold them as he could. The Mausoleum was dedicated on Sunday October 19, 1913. G. Stanley Cuning of Cedar Falls was the architect and Cecil E. Browning of Chicago was the chief engineer.

A letter written by Mrs. L.F. Wynegar, now in the hands of the Cedar Falls Historical Society, details the establishment of the Greenwood Cemetery Improvement Association. The association, according to Mrs. Wynegar, raised and spent nearly $15,000 on the cemetery up to 1939. It began as a group of ladies going out on certain days doing various types of yardwork around the cemetery. According Mrs. Wynegar: Some of these women were wearing 60 years of age but they all worked two full days grubbing out hazel brush and thistles, raking and burning debris, and finally smoothing the ground and seeding bare spots. The women who took the brunt of the task are largely resting in Greenwood Cemetery today. We, who in a small way carry on, are proud of their efforts, as we are also proud of the way the city has taken over their work and their interest in the place where they and their people rest. After incorporating as an association, sometime around the turn of the century, the group raised most of their money though bazaars, dinners, suppers, and potlucks. As the city took control over Greenwood Cemetery, membership declined. The association eventually dissolved, but its work remains an important part of Greenwood Cemetery’s history.

During Greenwood Cemetery’s earlier history there were no sextons or caretakers caring for the cemetery. The cemetery was not taken care of for a great many years. As a result the place was full of overgrown weeds and hazel brush. If someone looked for a grave, he or she came back covered with burs and scratches. Henry Feldt and George Kuehnle were the earliest caretakers. Olaf Simonsen served for one year. The next superintendent was Charles M. Lawrence who perhaps served longer than any one man. Lawrence retired from the job at age 78. Joe Eiler was his successor in April 1931. Since Eiler retired, Ray Muller, Harold Dennler, and Rusty Roberts have served as superintendents. Ray Muller started working at the cemetery in December 1968, and took over as superintendent on April 1, 1969. Muller retired in June 1973 because of ill health. Harold Dennler started working for the City of Cedar Falls Cemeteries in May 1968, and was appointed superintendent on June 1, 1973. Dennler retired in December 1983. Rusty Roberts started working for the Cedar Falls Cemeteries in February 1980. He was appointed superintendent in February 1984. Over the last 65 years, there have been a total of four superintendents of Greenwood Cemetery.

In 1912, the mayor and council members of Cedar Falls gave Greenwood Cemetery permission to build a mausoleum. Martin J. Van Tilburg was the principal promoter of its construction and Cecil E. Buyan from Chicago served as chief engineer on the project. The building was designed by G. Stanley Cunning, an architect from Cedar Falls.

The Mausoleum is a block type building done in a simple Egyptian Revival style with two wings on the east and west side of the building connected by a chapel. Ground breaking for the Mausoleum began on October 4, 1912 and construction was completed a year later. The Mausoleum is 102 feet long from the east to the west wings, and both wings are 31 feet wide, with the chapel measuring 38 feet across. The exterior is made of concrete and steel, covered with Blue Bedford Stone. The interior is marble with bronze trimmings. The construction of the Mausoleum did not use any wood so the building would last longer.

The Mausoleum contains a total of 268 vaults, and 24 niches for Cremation Urns, which are to the right and left of the front doors, stretching from the middle of the wall to the ceiling. Each vault is equipped with a sanitary ventilation system to keep the vault dry and to allow gasses from bodies to escape. All in all, the total cost to build the Greenwood Mausoleum was $30,000; however, maintenance has cost much more since then. 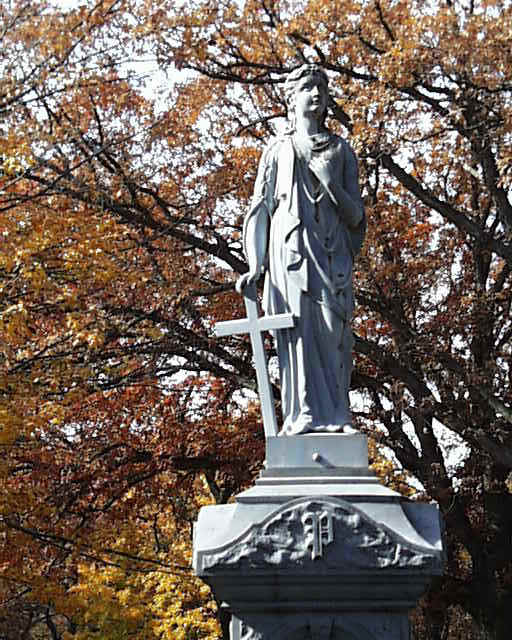 Greenwood Mausoleum's exterior has a stained glass window above the thick double, wooden doors with a cross centered in the middle. Inside, a waist high marble pulpit faces the entrance. Three rectangular stained glass windows on the right and left walls of the chapel are directly below the ceiling; they have a cross design. The roof of the chapel is high and slightly curved, coming to a point in the center. To the right and left of the pulpit are two private family compartments, although only one of the family compartments is occupied. Both compartments have stained glass windows which are narrow and curved to a point at the top of the window.

The Mausoleum has two wings, both of which contain two semi-private compartments. In front of each crypt is a shelf which stretches the full length of each wing and is approximately six inches in width. At the end of each wing is a large stained glass window with a tree centered in the middle symbolizing life.

The War Memorial and Veterans of Greenwood Cemetery

The War Memorial at Greenwood Cemetery was erected to not only salute the veterans of the Civil War, but also those of all of the wars that the United States has fought, including the War of 1812, Spanish-American, World War I, World War II, Korea, and Vietnam. This memorial commemorates the over 300 veterans buried in Greenwood Cemetery from these various American Wars.

The memorial itself is rather tall in stature. It is located just to the east of the Greenwood Cemetery Mausoleum. The inscription on the memorial reads "In Memory of Our Soldiers Dead". A pedestal of about five feet supports the soldier's statue. The soldier stands ten feet tall on top of the five foot pedestal. The great height of the soldier seems to depict him looking out over a great distance. 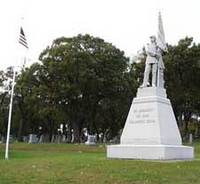 The statue depicts the figure of a volunteer soldier, holding by his side a standard issue sword, around which floats an American flag. On his head is a small brimmed hat with the bill pushed upwards. The soldier holds an American flag in his left hand and reaches across his body for his sword with his right. The man has his chin up and his chest out, showing a strong sense of pride. By reaching for his sword, it suggests that the man would fight for this flag and what it stands for. The soldier's eyes suggest he is scanning the countryside to protect his country. This memorial does an excellent job of showing respect to the fallen soldiers of so many wars. These men date back as far as A.D. Wychoff, who died on November 17, 1877 at the age of 88. There is an inscription on his tombstone that reads "A Soldier of 1812".
Veterans buried in Greenwood Cemetery have fought in every war since the War of 1812, including the Civil War, the Spanish American War, World War I, World War II, the Korean War, and the Vietnam War. The memorial may depict a Civil War soldier, but it commemorates every veteran buried in Greenwood. The last sentence of the article in the Cedar Falls Record reads, "This monument will stand as a memorial until time shall be no more." There could not be a better tribute to the brave veterans who are buried there.
Service Request
Notify Me®
Currents Newsletters
Rec Program Registration
Hearst Program Registration
To Top
[]